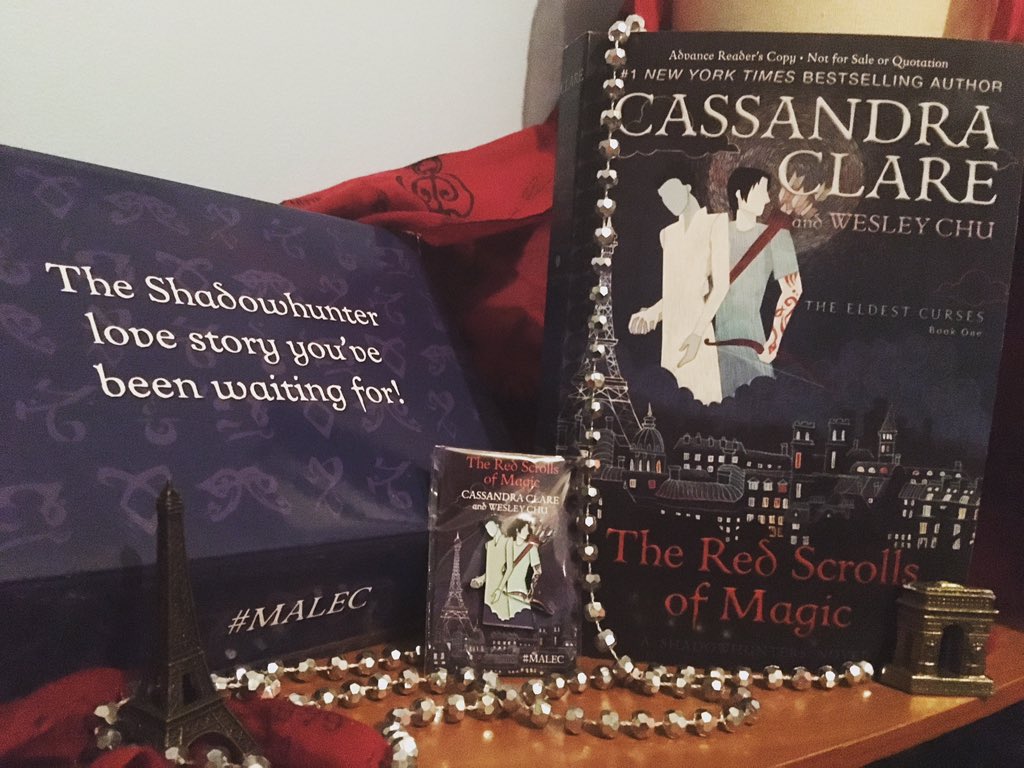 *I received an ARC of this book from Simon and Schuster for my honest review.*

This is going to be long, bear with me. I’ll get to the NO SPOILERS review, but first, a little backstory on how Magnus and Alec first entered my life and why they mean so much to me.

It was the summer of 2009, I was 17, and about to start college. The library in my hometown was finally opening the addition they had been working on for a while—the accessible, ground-level addition—and I was beyond excited.

The library that has been around since well before I was born is not wheelchair accessible. When I was little, my dad would carry me up the steps, but as I got older that stopped.

They built on to the building, adding a ground-floor section and I even got to be the first person inside when they re-opened!

I immediately went to the small YA section and City of Bones caught my attention. I had seen it before in stores, but didn’t know anything about it. I had been obsessed with Twilight, though, and there was a quote on the front of Stephenie Meyer praising the book. I didn’t need anymore convincing.

I read the first three books in The Mortal Instruments, which was all that was out at the time, and fell in love. The series opened up this love for reading I had only experienced a couple times before, and never as an adult. But while most people love Jace and Clary in the series, my favorites were easily Magnus and Alec. In fact, from then until the end of 2018, I claimed Magnus as my all-time favorite fictional character, with Alec in close second. It changed when I read A Court of Mist and Fury in 2018. However, after reading The Red Scrolls of Magic, they’re back on top where they belong.

When Cassandra Clare announced that she was publishing a new trilogy focused on Magnus and Alec, I literally cried. They had been my favorite for so long, I felt like I had been waiting for this my whole life. I requested an ARC, not expecting to actually receive one. A week later, it showed up on my doorstep like magic. I may have cried again…

For those who don’t know, Alec Lightwood is Nephilim, aka a Shadowhunter. Basically, they are demon hunters with angelic powers. There’s a lot more to it, but that’s the gist. Magnus is a warlock—the high warlock of Brooklyn. Warlocks, vampires, werewolves, and faeries are referred to as Downworlders, and they don’t particularly get along with the Shadowhunters, but they must work together to defeat the villains.

This is how Magnus and Alec met, and the rest was history.

Throughout the first half of the series, we see Alec struggling to accept who he is. Magnus is openly bi, but Alec has never told anyone he’s gay. Eventually, Alec comes around and what better way to come out than to kiss a warlock in front of an entire assembly of people, most of whom don’t approve?

As a young adult trying to figure out who I was in this world, I connected with these characters on a level I didn’t know existed. Clary is thrown into this shadow world, completely unaware of anything, and Alec is trying to accept who he truly is and how he feels. As I went off to college, I struggled with these things as well. The only difference was my demons were depression and eating problems. Over time, I reread the series, and each time I felt a little more connected to Alec. I’ve always had issues with self-confidence, and much like Alec I hid my true self for a very long time. I always felt like Alec was who I was and Magnus was who I wanted to be—I wanted that confidence and self-acceptance.

The Red Scrolls of Magic picks up after the war in City of Glass, and Magnus and Alec go on vacation to not only get away from everything but to get to know each other better. They start in Paris, but are quickly interrupted by an old friend (squeal!) coming to inform them of a rumor spreading that Magnus is the founder and leader of a demon-worshipping cult. He goes back through his memories, from the centuries he’s been alive, and he remembers joking about it but then the memory ends. There are a few years completely missing.

So, they head to Venice to hunt down the cult and figure out why they’re claiming him as their leader. In the manner that is all things Shadowhunter, there is a lot of action, demon killing, and mystery surrounding the situation.

If you haven’t gathered by now, I loved this book. It was everything I wanted and more. I was very worried that I was building up too much hope and excitement in my head, but I didn’t. Clare continues to amaze me in how much she can do within the same world. I dread the day when it ends.

Magnus and Alec, aka Malec, are my OTP. They bring me so much happiness, and this book somehow managed to make me love them even more. I was grinning like an idiot by page 2. This book was fast-paced and action-packed, but it was also hilarious. There were many times I laughed out loud at Magnus’s comebacks.

But there are also very real and serious moments as they try to solve this mystery while figuring out their lives together. Their love for each other is evident from the beginning, and we get to see it here in a way we didn’t in the other series. We see how Magnus is now treated for dating a Shadowhunter, how Alec struggles to express his feelings, and how they trust and protect each other throughout these trying times.

If you like the Shadowhunter books, or even just the show, definitely read this book. It’s wonderful. I am forever grateful for Cassandra Clare’s creation of these characters and finally giving them the attention they deserve. I can’t wait for the next book!