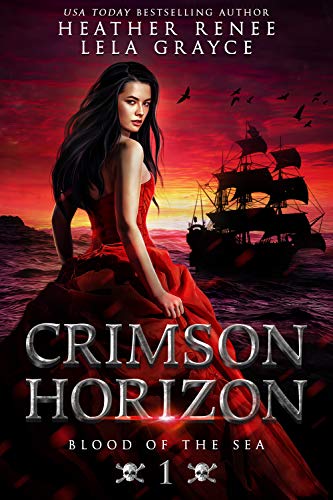 *I received a copy of this book from the author for my honest review.

Set in 1586, Lavinia has grown up with her aunt and uncle after the tragic loss of her parents. To save their farm, she is betrothed to the wealthy and powerful Pierce Ambrose. She doesn’t want this marriage, but is willing to go along with it for her aunt’s sake. When her home is attacked in the middle of the night, she finds herself running from pirates to the home of her fiancé. However, things are not as they seem there and she ends up running for her life with nowhere to go. Oh, did I mention the pirates are also vampires??

Lavinia then meets Jameson, who saves her in more ways than one. Each with their own secrets, they leave their vampire-infested island with a small group of people and set sail for what they hope is a safe place. Adventures, fighting, and being pursued by not only Pierce but Prime–the original and very powerful vampire–bring Lavinia and Jameson closer together. There’s something that connects them, a bond that instantly brings them to trust and fight for one another.

I was given the chance to be a beta reader for this book, and I was so grateful for the opportunity! When given a brief synopsis, I said, “You had me at vampire pirates.” I loved the story. It was unique and exciting from beginning to end. There was a fresh take on vampires. It was something I had never seen before, and I’ve read my fair share of vampire books.

The characters are fantastic. Their small group of friends consists of Henry, Alice, Nathan, and his young niece, Nettie. Alice teaches Lavinia to fight, Nettie instantly loves her because Lavinia reminds her of her mother who was attacked, and it’s all just so lovable. Attachments are made quickly between characters, as well as between the reader and characters.

This is a rapid release trilogy, and the books aren’t super long. The pace is fast, but it doesn’t feel rushed. It’s action-packed from the beginning and really kept my attention the whole time. The authors took turns writing, but the chapters all flow together cohesively. You cannot tell who wrote what, or even when the writer changes.

I really enjoyed this book! It is unlike anything I have read, while still containing the elements of YA fiction that I love to read–if you’re a reader, you know what I mean. If you’re looking for something new and easy to read, I recommend it.

It will be available December 27!
Pre-order here!