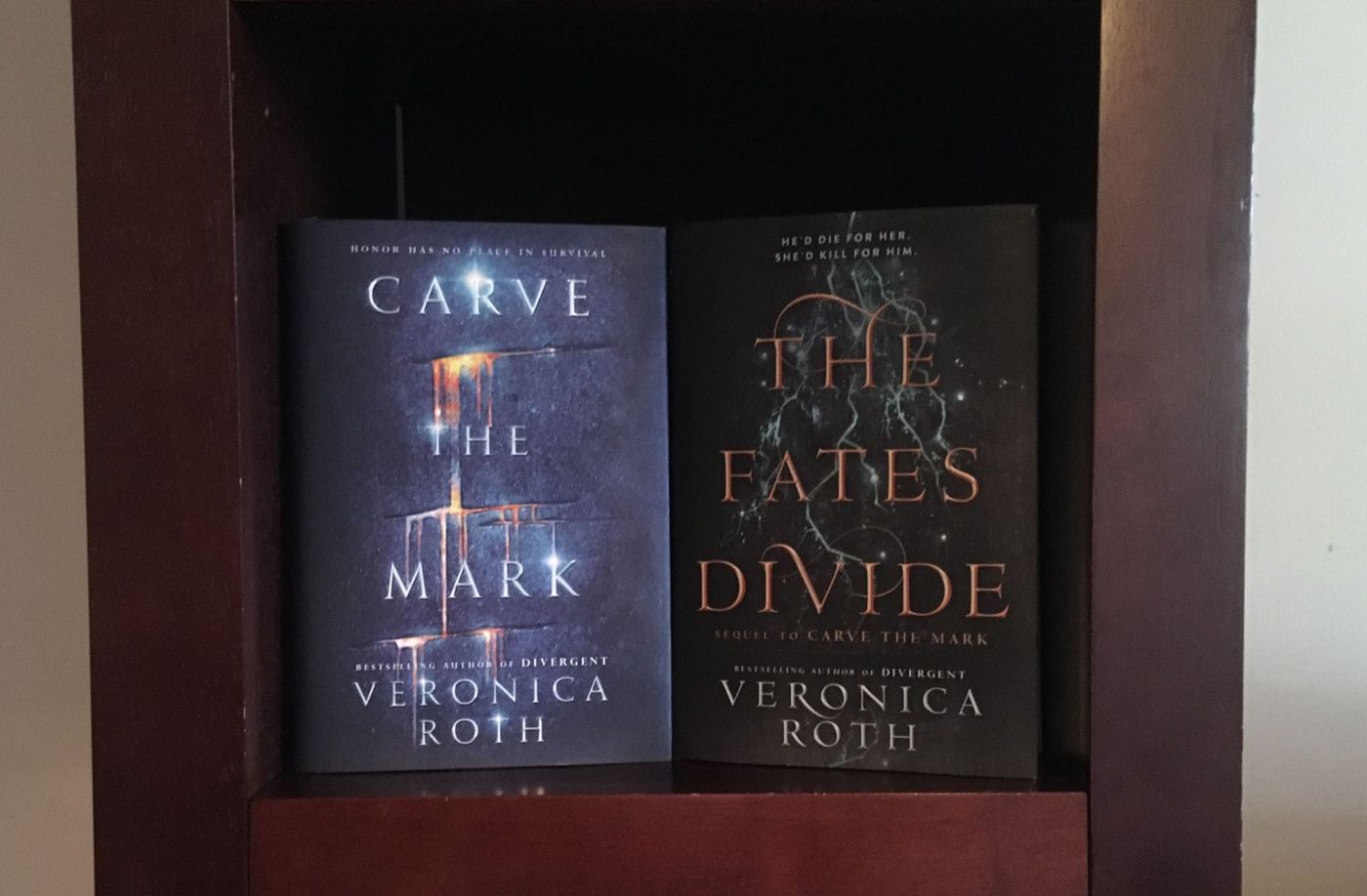 I have decided to do one review for both books in Veronica Roth’s newest duology. Let’s start with the non-spoiler stuff!

Carve the Mark is a young adult science fiction novel that takes place on a different planet. This planet, Thuvhe, is divided into two opposing sides with very different ways of life. In this solar system, there is a current that gives people various gifts; one being able to see the future. Each planet is occupied by people, and each planet has their own oracles. The oracles see a number of futures that alter with different circumstances, and nothing is certain. Except fates. Certain families’ fates are seen and these are absolutely guaranteed to happen, but the details of how it will happen are unknown.

This story is told from two perspectives: Cyra, who is a Shotet princess, and Akos, the Thuvhesit son of an oracle. Both of which have fates. Cyra’s family, the Noaveks, are feared among the Thuvhesit, and are rumored to kill anyone in their way. When the fates of all the fate-favored families are released to the public, Akos and his brother are kidnapped and brought to Shotet, where they end up forced to work for the Noaveks. The fates bring Cyra and Akos together, and they ultimately end up realizing they have more in common than they believed. While they work together, there is trouble brewing between their people and things get pretty intense.

I loved this duology! I have never really read much sci-fi, so I wasn’t sure how I’d like this, but I gave it a chance because I loved Roth’s Divergent series. These books are fantastic, though, and they’re full of action and awesome world-building. Now, because it is a completely new, unique solar system and world, there is a lot of details thrown in that you don’t really understand. However, the more you read, the more everything makes sense, so keep going.

It took me forever to read Carve the Mark. I started it when it came out last year, read about 125 pages, and then quit. Not because I didn’t like it, though! I was in a horrible reading slump and got into this awful cycle where I kept starting books and stopping after 100 pages or so. This happened with at least 5 other books that I can think of off the top of my head. So, I restarted it when I remembered that The Fates Divide was being released, and I had already preordered it.

I went back and forth between the hardback copies and audiobooks for both, but primarily listened to the audiobooks. They were narrated really well and I loved listening to it every night before going to sleep. In fact, I really miss it! I wish it would turn into a series so I could have more Cyra and Akos, but the book did actually end completely. I just need Emily Rankin and Austin Butler to narrate more books together…

*SPOILERS**SPOILERS**SPOILERS*
I was so anxious reading these books!! With Akos’s fate being to give his life in service of the Noavek family, I tried so hard not to get attached. That obviously didn’t happen. Plus, I don’t have a great track record with Roth… *ahem* Allegiant. But then the fates were switched and we found out they had already been fulfilled and I was just so happy. I just wanted Cyra and Akos to be happy. I love these books and am so glad it didn’t have a bad ending. I just wish we got more in the end. It was great seeing them a year later, but it was too short! Maybe I’m just too greedy.