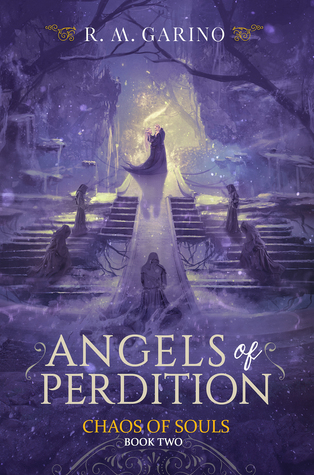 *I received an ARC of this book for my honest review.

This is the second book in the Chaos of Souls series. This review will contain spoilers of book one, The Gates of Galorath.

This book picks up right after the first book’s ending, just after the Menace. Arielle, Angus, and the rest of their Pride have set a record, surviving 34 waves of the beasts known as shrulks. As the last two standing in the end, Arielle and Angus join their powers and become Aesari–Angels of the Creator.

The people in attendance are beyond shocked at this divine event that has never been seen by those living. It also solidified Arielle and Angus’s unity. In doing so, they marry and are sent to the Marriage House, where they must spend twelve days away from the others.

When a mysterious visitor brings a wedding gift and a warning, their “honeymoon” is cut short. While running for their lives, they make an incredible discovery–one that challenges much of what they know of their world. Reunited with their Pride, allegiances are made, and together they must work to find the truth, rescue someone, and continue to defeat the threat to their people.

Garino has continued to build up this world and story in wonderful ways. It expands everything we know from the first book–giving us more about the characters and their traditions. The Gates of Galorath was a great start to a series, but this second book felt like where the true story started coming forth.

Everything is very well developed–the plot, the characters, the history of their people and world. I really enjoyed getting to know the different members of the Pride more. However, Arielle and Angus continue to be my favorite. They had me smiling and laughing at times, and then in near tears at others. Their constant banter, while still obviously loving each other, makes me so happy. I love it.

I’m very curious as to the part of the story that takes place in the future. There are chapters where it is 300 years later, and Angus is telling the story. He’s not with the others and has mentioned being betrayed by Arielle. So, I’m nervous about getting to that. I have a feeling this series is going to break my heart… more than this book already did.

If you like fantasy, I recommend this series. It is very well written, with beautiful descriptions and a new world to fall into. I very much enjoyed reading it and cannot wait to see how the story continues.

7 thoughts on “Cait’s Review of “Angels of Perdition” by R. M. Garino”