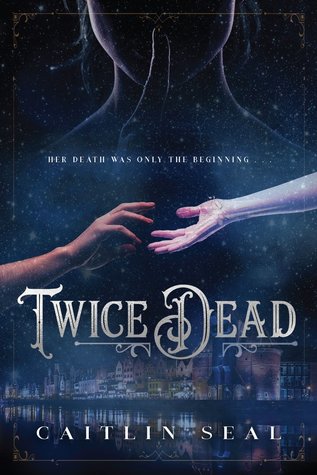 *I received an ARC of this book from Charlesbridge Publishing for my honest review.

Twice Dead is an intriguing, action-packed story involving necromancy, war, and betrayal. When Naya’s father, the captain of a merchant ship, docks in Ceramor, she is sent out on her first solo task to meet and negotiate with a fellow merchant. However, things do not go as planned…

Naya wakes up in the workroom of a necromancer after having been attacked and killed in the streets. She awakens not only as one of the undead but as a wraith, a monster from her worst nightmares. Her entire life has been filled with horror stories of the undead, with her homeland believing the practice of necromancy to be an abomination.

When she wakes, she is given an opportunity to work as a spy for her homeland. With the hopes of helping her country in getting this practice officially banned and making her father proud, she agrees. As she learns more about necromancy and what it means to be a wraith, Naya starts discovering secrets that make her believe that not everything she was taught might be true and she must decide who to help in the impending war of the two countries.

This book is unlike anything I have ever read. The concept of the wraiths and their use of life’s energy, aether, was so original. If anything like this already exists, I’ve never heard of it. It was fascinating! I also found everything with the runes intriguing. This world was like a mixture between olden times and modern technology as they used runes to power various things.

This book is full of action; it never stops. I love that it really just jumped right in and didn’t take 75-100 pages to get into the story. Nothing felt like it dragged on. It honestly kept me interested the entire time. Caitlin’s way of writing was easy to read too, which always helps.

I love the characters and really appreciated the interactions between Naya and Corten as he taught her what she was capable of, as well as their relationships with Lucia, the necromancer. I do wish there had been a little more to some of them. For example, there was a lot of build up to Corten’s background, but we never got the full story. I also want to know more about the Mad King and war that led to the treaty between the two countries.

I am assuming there will be a second book. There has to be. I need answers! Overall, I really enjoyed this book. It’s very unique and interesting. I would recommend checking it out. Twice Dead was released today, September 18!