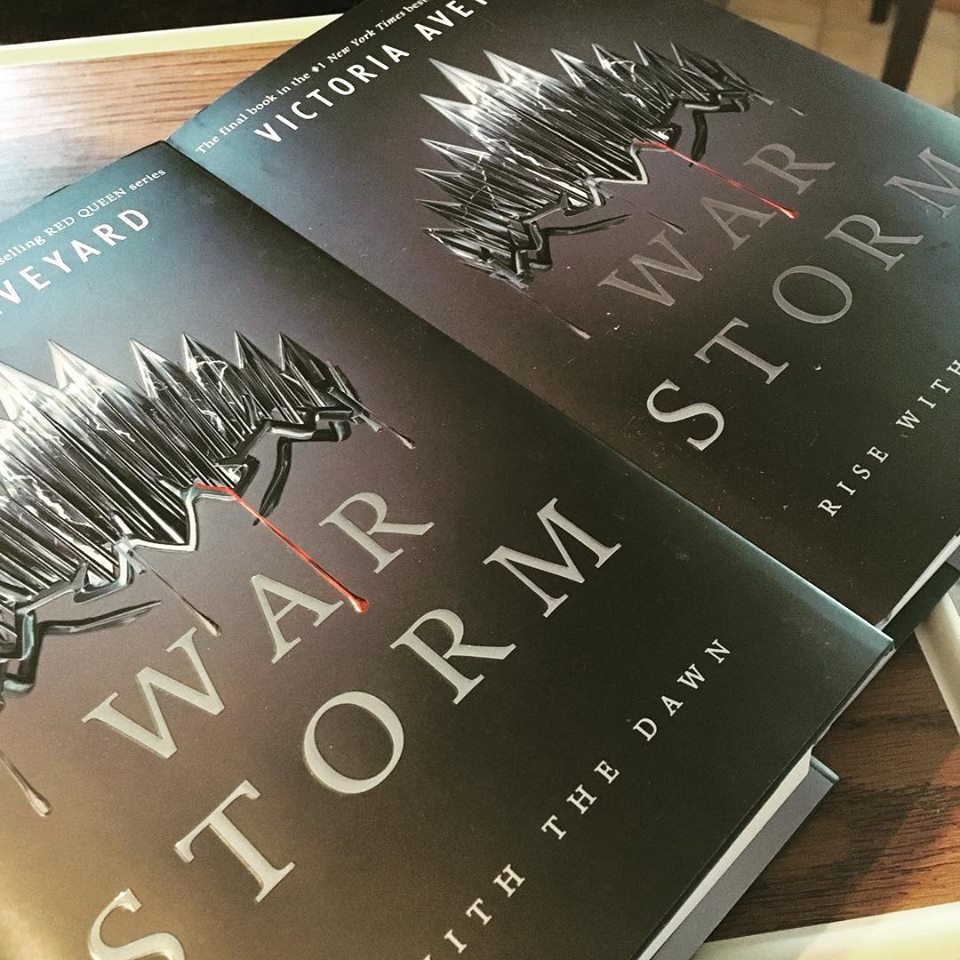 War Storm is the fourth and final book in the Red Queen series. If you read my last book haul, you know how excited I was for this book. You also know that I was able to go to the book tour and meet Victoria Aveyard! To read about that whole experience, click here.

This is one of my favorite series. It is a dystopian set in a future where some people have evolved into having powers. These people also have silver blood, as opposed to “normal” people with red blood. The silvers now rule the kingdoms in what was once North America, and the reds are treated as servants basically.

When tragedy strikes the Barrow family, Mare starts working as a servant in the castle. She soon discovers that she has a power despite having red blood. The royal family take her in and claim she’s a long-lost silver. They form an engagement between her and the younger of the two princes, Maven. However, it is the older heir, Cal, whom she is pulled toward.

Throughout the series, there is a rebellion happening. The reds are tired of the injustice throughout the kingdoms. Mare attempts to help them and is swept up in the action and several betrayals and heart breaks.

As this is the fourth book, the rest of this review will have spoilers from the first three books. I will warn you before War Storm spoilers, though.

This book picks up just where King’s Cage left off. The Scarlet Guard has taken Corvium, with the help of Cal and some other silvers. Cal has just told Mare about his plans to accept the crown of Norta, as it is his birthright and he believes he will be more help to them on the throne. Of course, this is just another betrayal to Mare and they end things knowing they’ll work together, but at the end of everything it won’t work.

Montfort, the Rift (aka Evangeline’s family), and the Scarlet Guard work with Cal and his supporting silver families. They travel to Montfort and witness how reds, silvers, and newbloods live together in peace. They also must face Maven and the Lakelands in the final struggle for control of Norta.

This book is intense. There is so much that happens! It did an excellent job, in my opinion, of finishing out the series. I struggled between not being able to put it down and not wanting it to be over. There was one small detail I didn’t particularly like, but that will be in the spoiler section.

When I first opened the box with the book (both copies), I was shocked at the size of it. It’s like twice the size of Red Queen. It was intimidating, but it ended up not being hard to read at all, which was something I was concerned about. While this is one of my favorite series, the last book did take me a bit to get into. It felt like it dragged on in the beginning as Mare was imprisoned by Maven and miserable for a long time. It was necessary for the story, but it did take me awhile to get through. Once it picked up, though, it really picked up and I couldn’t stop reading. This book was not like that. It kept me interested throughout the entire thing, from the beginning.

Overall, I absolutely loved this book. This series is one of my favorites, and this final book did not disappoint! I already want to re-read all four books. I cannot wait to see what Victoria writes next!

I have shipped Mare and Cal from the beginning. A lot of people do not like Cal because of his indecisiveness, but I love him and I love them together. However, I understood their reason for not being together, even though I hated it. Their constant denial and people calling them out on it was entertaining. Of course, I was then excited when they quit trying to stay apart.

Mare fighting Maven in the end kind of broke my heart. I had hoped there was some way to “fix” him, but I understand that it was impossible. Like Mare, I wished he could be who we all thought he was in the beginning. His death, while necessary, was so sad!

I also ended up loving Evangeline. I never thought that would happen, but it did. She is so fierce and redeemed herself multiple times. I loved her little moments with Cal and Mare, where they still didn’t like each other, but they understood each other.

Then the end. When Cal asks if it’s too late and Mare says no and runs to him… and then he says no more crowns and Mare replies, “about time” (or something to that extent) and they embrace with the battle going on all around them… my heart melted. I thought I was finally getting to see them really together. At the end, though, they go their separate ways kind of. The last sentence is Mare saying she will go back, but I don’t know. I just don’t feel like I got complete closure. I’m just greedy and want more of them together. Victoria did mention something on Twitter about us getting more, but I don’t think it will be full books. Either way, I look forward to it!