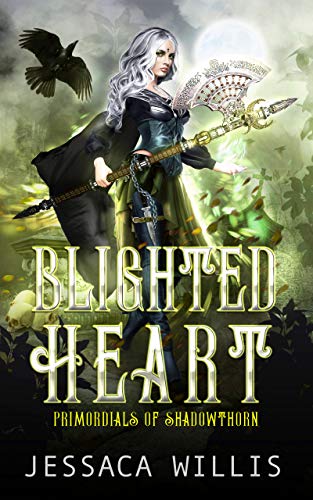 She trained to kill demons…now she’s becoming one.

While fleeing the Castle of Nigh and her own execution, Halira was bitten by a demon of the Shadowthorn.

Such a wound would kill any mere human. But Halira’s not just human. And her newly-discovered druid heritage will protect her…for now.

It’s up to Halira and the mysterious half-demon man she’s stumbled upon to find the cure before the demon toxin runs its course and kills them both.

Blighted Heart is the second book in the Primordials of Shadowthorn trilogy, a gothic high fantasy series about the demon hunters of Arcathain and their mission to reclaim their lands from the Primordial Qaeus. With a strong female lead, epic world-building, Lovecraftian immortal creatures, and a budding enemies-to-lovers romance, this series is perfect for fans of Leigh Bardugo, Elise Kova, Jennifer L. Armentrout, and Cameo Renae. Join the Shadow Crusaders and plunge into this grim, ethereal world.