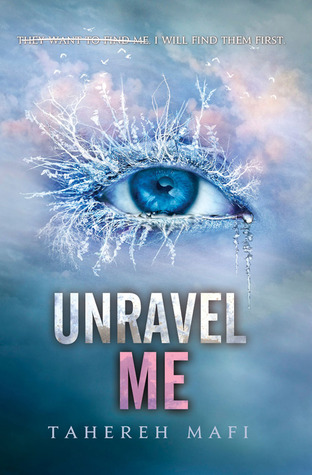 I have previously written a review on Shatter Me by Tahereh Mafi, found here.

I enjoyed the first book so much that I wanted to continue the series. I am reviewing Unravel Me, the second book in the Shatter Me series. I am excited to start this review off by saying how much I adored this book. There were a variety of reasons why I loved the second book, in fact I felt it was even better than the first book in the series. There was a lot of character development, action, and the way the author wrote truly made me feel like I was in the book.

First, I want to start off discussing the character development that occurred throughout the book. One of the main characters, Juliette, starts out having a ‘whoa is me’ demeanor and turns into something amazing, but you must read more about why and how in the book. Warner, another main character, started to create a persona that I did not even expect compared to how he was portrayed in book one.

The action within the book went from preparation to a bunch of events that happen quickly and escalate to the point of a major event. The book was written in a way that made me keep reading and never wanted to set it down. At one point, I was so immersed that I was reading for two hours straight before going to bed because it kept me up. That should tell anyone who intends to read this book, make sure you are reading at a time when you have nothing going on and are not trying to fall asleep. The action involved will keep your mind reeling because it is that good.

Finally, I really want to point out how much this book just pulled me into the story. I was consistently feeling as though I was a character within the group of people in the story. I would feel sad when something was going wrong with Juliette, I would get angry if something happened, and there were even times where I felt like I could have fought right along side the characters. At the end of the book, I knew I had to get my hands on the third book, Ignite Me.

I give this book a 5/5 stars because of the way it was written and how well it was written. I enjoyed every minute of the ride that Tahereh Mafi provided in Unravel Me, and I am extremely excited about Ignite Me. I plan to continue finishing the series even if she continually writes for years because the books are that good. I encourage anyone to try them out, as they just keep getting better and better as they go on.