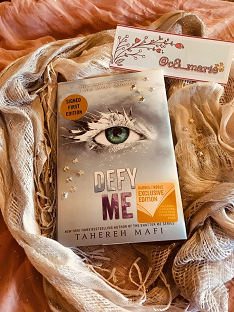 Defy Me is the fifth book in the Shatter Me series, so if you haven’t read the others, this review will have spoilers. I will not include Defy Me spoilers until the very end, though, and I’ll warn you all when I get to that point.

Defy Me picks up right at the end of Restore Me, when they’re all at symposium. Except it’s from Kenji’s point of view. Juliette and Warner disappear, then the 600 people we thought she killed, “wake up.” It was all a show. The Omega Point crew is fine, but now they need to hide.

Juliette is with her birth parents—her mother being the Supreme Commander of Oceania—and things get intense fast. We learn more about her background, why she was given to the Reestablishment, and what’s happening with her sister. Memories are returning from her life. Memories that were erased. Memories of Warner, Nazeera, and her family.

Meanwhile, Warner is being held prisoner and his memories are returning as well. He and Juliette were friends as children. They kept being brought together, then ripped apart with their memories swiped. But it never failed that they’d end up back together.

They’re fighting for their lives while trying to fight their way back to each other. The true horror of all the Reestablishment has done comes to light, and Juliette is more determined than ever to bring it all down.

So, first of all, wow. This series just continues to blow my mind. There are so many twists and turns, ups and downs, and I can’t help but wonder if all of this was what Tahereh had planned from the beginning.

As always, the book was so well written. I love her style of writing. It’s so easy to read and stay focused for me. I read the whole book in two sittings, and the only reason it took that long was because responsibilities.

Kenji is still my favorite. I loved that there are chapters in his POV. It adds to the story, as we get to see the different aspects of what’s going on. And, of course, Warnette for life. The only thing I didn’t really like, which I noticed in the last book too, is that Adam and James are barely part of the story anymore. I’m not a fan of Adam’s, but he was such a significant part of the first three books that it feels weird for him to be so absent. And I just love James. I want him to be in it more. I want more interactions with him and Warner, and I want him to know they’re brothers.

I love the build up of the plot. I love the characters. I just love the series so much!

Okay, I don’t even know where to start, so I’m going to just talk a little about each character, Warnette, and then one of the plot twists…

Juliette — The whole thing with Juliette being tortured was truly cringe-worthy. It reminded me a lot of Kingdom of Ash, actually. It also made me so sad that all of her memories with Warner were taken.

Warner — Oh, Warner. He’s become this precious cinnamon roll of a character. It’s hard to believe he was once the villain. The end with his birthday party… I almost cried. Like he’s finally happy and has friends and I swear, if Tahereh destroys his happiness… there will be words.

Kenji — Kenji is the best. I love him with all my heart. I want him as a best friend. When he stops Warner from proposing because he doesn’t have a ring or anything, and then goes off on a tangent about movies, I was laughing so hard. The fact that he loves Tangled, and that it even exists in this world, makes me so freaking happy.

Warnette — I just… they’re so perfect, it almost hurts. If something happens to either of them in the last book, I will lose it. Like I am seriously not emotionally stable enough to deal with that. He freaking proposed. Ignoring Kenji’s advice, he asked her to marry him while lying in bed. AND. IT. WAS. PERFECT. my heart can’t hardly handle their love.

The reason he had to keep wiping their memories was because it didn’t matter how many times he reset the story or remake the introductions—Aaron always fell in love with her. Every time.

Plot twist — So, it turns out the world is not completely destroyed like everyone believes. Emmaline (Juliette’s sister) has powers that have been manipulated to basically create the illusion for everyone to see the gray sky and damaged earth. But as soon as Nouria says she had Juliette shot so she could test something for herself, I knew it. I immediately thought, “OH MY GOD, she really was seeing the bright sun in the medical wing!!!” And then, of course, that was said like a page later, but I felt awesome for guessing correctly.