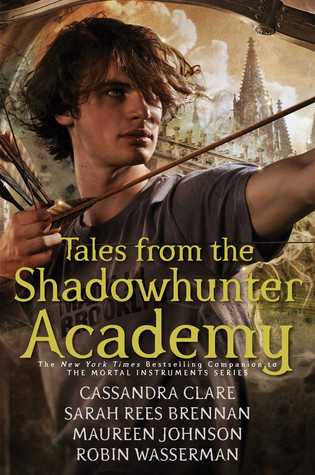 Simon Lewis has been a human and a vampire, and now he is becoming a Shadowhunter. But the events of City of Heavenly Fire left him stripped of his memories, and Simon isn’t sure who he is anymore. He knows he was friends with Clary, and that he convinced the total goddess Isabelle Lightwood to go out with him…but he doesn’t know how. And when Clary and Isabelle look at him, expecting him to be a man he doesn’t remember…Simon can’t take it.

So when the Shadowhunter Academy reopens, Simon throws himself into this new world of demon-hunting, determined to find himself again. His new self. Whomever this new Simon might be.

But the Academy is a Shadowhunter institution, which means it has some problems. Like the fact that non-Shadowhunter students have to live in the basement. And that differences—like being a former vampire—are greatly looked down upon. At least Simon is trained in weaponry—even if it’s only from hours of playing D&D.

Join Simon on his journey to become a Shadowhunter, and learn about the Academy’s illustrious history along the way, through guest lecturers such as Jace Herondale, Tessa Gray, and Magnus Bane. These ten short stories give an epilogue to the Mortal Instruments series and provide glimpses of what’s in store in the Dark Artifices.

As everyone knows, the Shadowhunter books are my absolute favorite. That being said, I’d never read this collection of short stories. Until a few years ago, I usually didn’t read short stories.

I also didn’t think this one was directly connected to the characters in The Mortal Instruments. I actually didn’t find out they were Simon’s stories until I started reading The Dark Artifices the first time. Needless to say, I was a bit confused by things, but at that point I didn’t really have any interest in reading more about Simon… shh.

Well, I’ve been re-reading all the Shadowhunter books the past year, and I decided to finally read it while getting caught up on the ones I’d fallen behind on. And I actually enjoyed it a lot more than I anticipated!

I’ve gone back and forth on my feelings about Simon for more than a decade. I really loved him in the beginning of The Mortal Instruments, and I like him in the movie and show adaptations, but he got really… whiny in the fourth and fifth books. He was amazing in the end, of course, but then he was mopey again in The Lost Book of the White, though I think that was mainly due to the narration of the audiobook.

Tales from the Shadowhunter Academy, however, gave me a whole new appreciation for Simon Lewis. He was still his usual eh self in the beginning, which made it difficult to get into at first. I think by the second story, I was sold though.

I loved getting to see this side of Idris and the shadow world, as well as some of the other characters who are mentioned in later series.

Simon is truly an honorable person, and he’s relatable. All the main characters in the other series are born Shadowhunters, even Clary, though her memories were altered to forget. But it was in her blood. Simon, on the other hand, was completely human before being thrown into this world. He’s gone through so much, but he continues to push forward. He fights for his place, and he genuinely wants to help protect everyone.

This book was pleasantly delightful. It was so much more than I thought it’d be, and I really enjoyed it. It’s also a lot more important to the overall story than I anticipated. Now, I can’t wait to read Ghosts of the Shadow Market, which I’ve never read either.