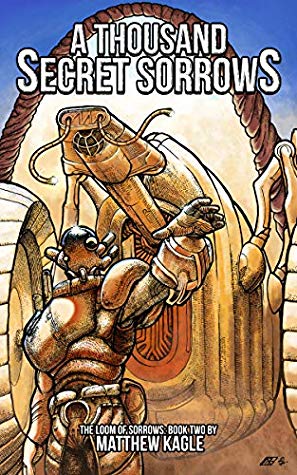 The Loom of Sorrows, Book 2

A thousand feet underground.
A billion years from Earth.
A week to live.

Keldin gave up everything to survive: his career, his community, his family. He was beaten, mutilated, and poisoned. He traveled to an alien world, passed through fire and ice and darkness and a mile of solid rock.

Armed with only the barest of tools and the briefest of training, he walks abandoned tunnels, groping in the dust for abandoned memories. He painstakingly unwinds the tapestry of nine billion lives, looking for a single thread: Ennun, humanity’s savior.

As a child, Ennun was a homeless refugee and an expatriate. He grew to become an explorer, a soldier, and the heir to a kingdom. Then he abandoned paradise, abandoned everything, to save humanity.

For hundreds of years, the greatest historians have scoured the world for the key to understand him.

If Keldin can’t find it in one week, he will die alone on an alien world.

Matthew Kagle is remarkable in that he has had many unremarkable jobs: short-haul driver, fast food cashier, janitor, accountant, and video game tester (just to name a few).

He picked up the pen (literally) when, as a UPS delivery driver, he was told to destroy a rejected shipment of 800 defective BiC pens but kept them.

Yes, they leak a bit, but he’s written almost all of his published works with them. Matthew lives in the outskirts of Tampa, Florida with his mother and two sisters.