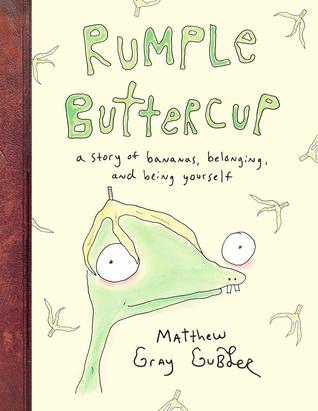 I’ve been a fan of Matthew Gray Gubler since Criminal Minds premiered in my senior year of high school. I was a little late to the game in finding out that he had written a children’s book, but when I did learn about it, naturally I ordered a copy and jumped right into it when it arrived. This story is utterly adorable and would be a spectacular bedtime story for a little one or an anytime read for well, anyone.

Rumple Buttercup is a monster with 5 crooked teeth, 3 strands of hair, green skin, and a left foot slightly bigger than his right. He lives underground in a rain drain near a trash can where he hides from the people above since he believes that they’ll reject him because he’s weird. He’s a lonely monster who created his best friend, Candy Corn Carl, out of trash he’s pulled out of the can. Sometimes at night, when the moon is just right, he sticks his head out of the drain and reaches into the trash can and gets a banana peel to put on his head to disguise himself, so if anyone does see him, they’ll just think that he’s a pile of garbage. Though, there is one day a year, when the town has a big parade, that Rumple will come out in the daylight as no one would notice him. Rumple comes to find that everyone is weird in one way or another and that we should embrace our ‘weirdness.’

Written and illustrated by Matthew Gray Gubler, this is a wonderful work full of weirdness and acceptance, and it is truly a story of bananas, belonging, and being yourself.

“Everyone is weird and that’s what makes us great.”

You can check it out on Goodreads or, if interested, purchase it on Amazon or The Book Depository*.

This review is also posted on Fathoms Amidst the Lines and Goodreads.

*Book Depository affiliate link. I receive a small portion of any commission made from using this link.