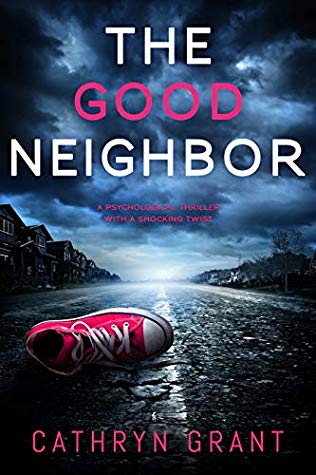 When 14 year old Brittany disappears one night, her parents are devastated, certain she has been taken.

They can’t bear to think about who has done this and what might be happening to their precious girl.

Even worse, the police seem to see them as suspects, implying that they may have had a part in their own daughter’s disappearance. Only their neighbor, Taylor, is a rock. She organizes search parties, feeds the volunteers, works night and day to help them find Brittany.

But as this affluent California community becomes focused on the hunt for the missing girl, it slowly becomes clear that her disappearance is linked to terrible secrets from the past.

Secrets that must be kept hidden at all costs….” Summary from Goodreads.

Sounds fascinating right? The synopsis certainly caught my attention and had me biting at the chomp to read it. Sadly though, for as captivating as the description is, this one just didn’t do it for me. Other than one surprise twist towards the end that ties in the prologue, I figured out what was going on halfway through the story. Let me be clear, this story wasn’t bad, but it wasn’t the greatest either. It truly has an interesting premise, but it just wasn’t executed well.

To be honest, I’m not sure how to write this review, while I didn’t hate the book, I also didn’t particularly like it. The situation aside, I think what bothered me most in this story was the characters. There’s the missing teenager Brittany, her parents Moira and Alan, the neighbor across the street Taylor, Brittany’s biological mother Crystal, a neighborhood late-teenaged Luke and his group of friends, and a slew of other characters that pop in and out. Surprisingly, these characters seemed relatively realistic at first, but as the story unfolded that realism took a nosedive and just became tedious and ridiculous.

Starting with Taylor, she’s the neighborhood watcher/busybody. She wants that ideal everyone knows everyone and helps each other out neighborhood (which isn’t a bad thing) and is a social media-phobe who, when Brittany goes missing, on the advice of the detective in charge, creates a Facebook page for the missing girl and then gets addicted to it and the attention it receives. She really annoyed me; she was always up in everyone’s business, despite not knowing them well or at all and her husband was constantly telling her to cool it, yet she just couldn’t help herself and then got annoyed when not everyone was doing the same thing.

Moira and Alan Cushing are the parents in this story and completely bonkers. On the surface, they seem like fantastic parents who love and dote on their child but are horrendously overprotective the deeper it goes. Homeschooling Brittany always and keeping a close eye on everything she does, these two, take parenting to the extreme and not in a good way. When they discover her missing, Moira immediately jumps to the conclusion that she had been abducted from her bedroom and refused to hear any different. This isn’t too much of a jump given the scenario readers are presented, but, before I knew the whole story, it just bothered me that she was unwilling even to consider that Brittany had left of her own accord. Alan isn’t quite as bad as Moira, he obviously loves his wife and daughter, which is proven throughout the story, but alongside his wife did a lot of messed up things regarding Brittany.

Crystal, Brittany’s biological mother, as we find out, was involved in a car accident that killed her husband leaving her injured and a single mother. She fell into a deep depression and got hooked on pain medication for her back. Based on what is told via Crystal’s POV and the Cushing’s, the back injury received in the accident left her debilitated, depressed, unable to work, and neglectful towards her daughter. It was this neglect that created the situation where Moira and Alan were able to ‘abduct’ Brittany. As someone who has never been addicted to any substance and am not a mother, I can’t begin to imagine what this character has gone/ is going through, but some of her actions as the story progresses and she’s featured more are highly questionable.

Luke and his friends are the typical late teens/early twenties college students that are figuring out what they want and where they fit into the world. Hanging out after hours smoking pot in the gazebo in front of his house, the group welcomes Brittany when she begins sneaking out to meet them. Brittany learns a lot from this group, and it’s this group that are the ones who help her when revelations are made, and things get overwhelming. Given Luke’s habit of hanging out in the gazebo and watching the neighborhood, Moira goes off on how he’s a creep who constantly stared at Brittany. This accusation not only gets him hauled in for questioning but has the neighborhood turning on him and vandalizing his car.

Brittany Cushing is a character that I just can’t help feeling for at first. Readers first introduction to Brittany is through Taylor’s eyes as the Cushing’s furniture is being moved in, Taylor notes that they must have a little girl due to the princess bed that alludes to a young girl. When Moira and Brittany arrive, Taylor is surprised that instead of a little kid, the daughter is a teenager. From there we learn more about Brittany and her highly censored and sheltered world. For as adamant as Moira was about Brittany’s time being on the computer constantly being monitored, neither parent knows that she’d figured out their password and had been sneaking onto it at night while they’re sleeping and exploring the world through the web the way any teenager would. As the story progresses, readers are shown some disturbing things that the Cushing’s, Moira particularly, have done to her; nothing sexual mind you, it didn’t reach that level of terrible.

Just in case anyone wishes to read this book, the next little bit is full of spoilers, so I will have it marked when I finish and it’s safe to read again.

The seclusion of Brittany by the Cushing’s, while terrible, isn’t surprising when it’s found out that they kidnapped her as a child and therefore have no papers for her, and it’s the reason they move around a bit under cover of Alan’s job. The worst part about the entire situation is that readers come to find out that Moira and Alan had been giving Brittany shots for years that would delay her puberty. She only comes to realize what’s happening when one of the girls in Luke’s group of friends mentions being on her period; a topic Brittany knows nothing about. When asking Moira about it, Moira freaks out and demands to know where she heard such a thing. Not giving up her source, Brittany brushes it off and begins her own investigation. Looking up the drug that she was injected continuously with (it was never named), she learns what it does and is horrified by the discovery, which leads her to “running away.”

Focusing off Brittany for a bit, the ending is so strange that I couldn’t believe it. Moira and Alan attempt to give Crystal a fatal dose of fentanyl when she comes to California while Britany is missing, and instead of it working, because of her tolerance, she came to while in the trunk of Alan’s car when he went to dump her body. She ends up killing Alan with a shovel before returning to the Cushing’s house where Brittany, Taylor, and Moira all are. Seeing Crystal for the first time since she was a child, Brittany yells out “mommy” and runs to hug her. This bothered me slightly just due to how the scene was set up, but this showing sets off Moira, who grabs a kitchen knife and stabs Crystal a couple of times, eventually killing her. Here’s one little twist, Taylor took the knife from Moira and killed her, and when the police asked what happened, Brittany lied and told them that Taylor did it because she thought that Moira was going to stab Brittany; she wasn’t by the way, Taylor straight up killed her.

The end of the story comes in two parts, the first that ties in the prologue, and the second with Taylor and her husband fostering/adopting Brittany. Finally getting to the prologue, readers come to find out that the Cushing’s had a daughter named Grace that compared to Brittany, had an average life. She wasn’t sheltered by Moira and Alan in the slightest; it wasn’t until she got her period that things changed and may or may not have resulted in her death. Honestly, the last few pages of the second to last chapter of the book was the best to me because it was an excerpt of Grace’s diary that was written on the day that she died (also see prologue) and explained a few things about Moira and why she did what she did to Brittany. If there was a prequel to this story, even if it was just a short story, that focused on Grace and how Moira was prior to Grace’s death that would be an interesting read cause boy does Moira have untreated issues, and it might make this story slightly better by knowing the possible why’s behind why Moira is the way she is.

Overall, I know that this book has gotten primarily good reviews so far, and just because I didn’t care for it doesn’t mean that others won’t. With winter approaching, if you’ve got a free afternoon sometime, give the book a go and see what you think; as of this posting, the book is available on kindle unlimited. I would genuinely love to hear from those who have read this and find out their take on it. So, if you do read this or if you already have, please leave a comment letting me know what you think/thought about it. I don’t know much about this author, but I’ll likely check out some of her other works at some point and see how I find them compared to this one.

*Thank you NetGalley for this free eBook copy in exchange for an honest review.

You can learn more about the book here: Goodreads or, if interested, purchase it on Amazon.

This review will also be posted on Fathoms Amidst the Lines, Goodreads, and NetGalley.