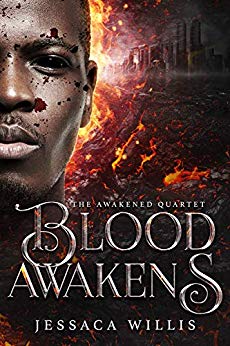 People called Sean a blood guide, though he never fully understood why. As far as he knew, he could hear heartbeats and heal people. It wasn’t until he walked in on his brother’s brutal murder that he learned of the darker nature of his power: blood speaks to him, and he to it. With a simple song, he can command it to do whatever he wants, and in that moment, he showed his brother’s murderers no mercy. Now Sean must fight to keep his inner demons in check and his path to redemption begins with the establishment of a sanctuary for people like him, people with powers, the Awakened.

Two years after the Awakening, after the wars that destroyed entire societies and brought about “the end of the world,” Graciela and her brother Santiago are struggling to survive. Graciela is one of many who never Awakened, but she’s watched as her brother’s power as an empath—the ability to sense other’s emotions—has brought him to the brink of death. Together, they set across Central America in search of a cure, or at the very least, safety in a crumbling, dangerous world. What they find is a sanctuary called Hope, the same one Sean governs.

But they soon discover that even from within the compounds of the sanctuary, no one is safe. Not when there are people in the world with unimaginable power and an insatiable bloodlust.

Fans of The Young Elites, Year One, and Shatter Me will devour this diverse post-apocalyptic paranormal fantasy.

Growing up in the 90’s and early 2000’s, Jessaca spent her free time heavily immersed in books and shows such as Harry Potter, True Blood, The Sword of Truth/Legend of the Seeker, and Merlin, so much so that at one point she truly believed fantasy worlds were real (maybe she still does). Her passion for the unimaginable and the magnificent grew, leading Jessaca to a career in fantasy writing, with an inclination toward the dark, horror, paranormal, and dystopian/apocalyptic sub-genres.

Before she realized being an author was more than her own fantasy though, she was a wandering college student who believed in making the world a better place. She studied social work for her undergraduate and graduate degrees, and participated in a number of study abroad programs that led her to countries such as Guatemala, Italy, and Bolivia. So that her studies don’t become entirely useless, Jessaca draws heavily from her experiences abroad and from her education in human development, social institutions (race, gender, class, sexuality, etc.), mental health, and family roles, to incorporate into her novels and short stories.

Jessaca is a self-proclaimed nerd who loves cosplay, video games, and comics. She grew up and still lives in Portland, Oregon, where she resides with her partner and their fur- and human-babies.