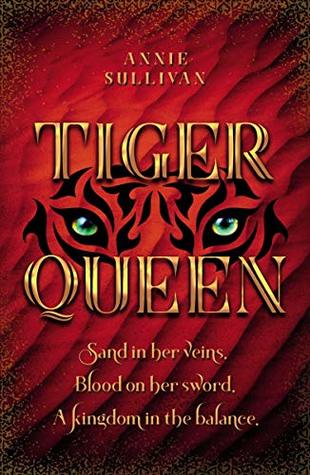 *I received a free advanced copy of this book via NetGalley.*

To prove she is chosen by the desert and worthy of the crown, Princess Kateri must face a dozen opponents in the arena–one each month leading up to her 17th birthday. If she wins, she will become queen and choose her own husband. If one of the opponents wins, they get to marry the princess and become king.

Kateri has been training for this her entire life. She longs to become queen so she can not only prove her worth to her father but help her suffering people. The kingdom of Achran is in the middle of the desert, a near-impossible distance from all other places, and their water must be rationed. It’s barely enough to survive on. Yet there is a group called the Desert Boys who keep raiding the wells, making the king lower rations each time.

Kateri’s deepest wish is to put an end to the Desert Boys once and for all. But when her final opponent is revealed to be her ruthless trainer, whom she knows she cannot beat, she flees the city in search of the one person said to be unstoppable: the leader of the Desert Boys.

Things are not as they seem, though. As she begins unraveling truths about her father and kingdom, she grows closer with the Desert Boys, finally understanding their behaviors as more than the selfish acts she believed of them. Particularly Cion, the leader who risks everything time and time again to help these orphaned boys survive in a world where their mere existence is against the law.

Last year, Annie Sullivan’s debut novel, A Touch of Gold, was my favorite 2018 book. This book is definitely making the 2019 list! I was so excited when I learned of Tiger Queen being released this year, despite it not being the sequel I desperately need. When NetGalley approved my ARC request, the day before my birthday I might add, I almost cried I was so happy.

It only took me this long to read it because of how rough my summer courses ended up being. Once I really started, I couldn’t stop. I ended up reading the whole thing in like two days, which is quick for me nowadays with how busy I am. It was so good, though!!

The story is so original (to me at least; I can’t remember if it’s a retelling, but if it is, I don’t the original one) and captivating. I love how fierce Kateri is and how much she wants to fight for her right to rule the people of Achran. She genuinely wants to help them–make it a better place for them to live.

Then there’s Cion, whom I now love with all my heart. From the very first scene, in which he threw down a rope after Kateri falls into a well, despite his hate for the royal family, I knew he was going to be a new favorite. He is so protective of those he cares about and is willing to do anything for them. He and the Desert Boys actually remind me a lot of Peter Pan. I’m not sure if that was intentional, but I loved it so much.

The whole book was well written. Once again, Sullivan was able to easily catch and keep my attention all throughout. I love her style of writing and world building. There is such an easy flow to her words, her characters are well-developed, and I quickly get lost in these worlds she has created.

Like I mentioned in a review earlier this week, I’ve been in a fantasy slump lately. This book thoroughly made me want to get back into it, though! It was also nice reading a standalone, which I’m not usually a fan of in fantasy. However, this story ended wonderfully. I would love to read more about Kateri, the Desert Boys, and the future of Achran, but I’m also happy leaving it as is.

I will absolutely be reading any of Sullivan’s upcoming books. I am super excited for the sequel to A Touch of Gold! I highly recommend both of her books if you haven’t read them yet.

Now, ironically, I have to go get ready for the Tiger Queen launch party! Stay tuned on Twitter. I’ll be sharing photos and updates there.