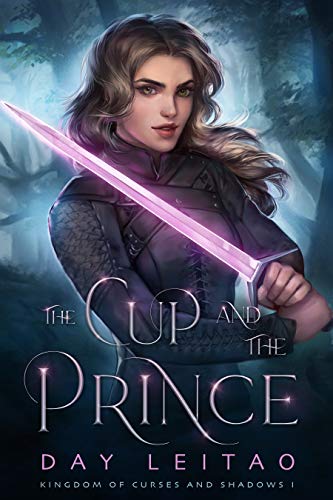 This review was originally posted on YABC here.

The Cup and the Prince by Day Leitao tells the story of Zora and her journey of becoming a Champion for her village in the Dark Valley in the prestigious Blood Cup.

The story has many twists and turns that keep the reader on their toes. The story switches POVs between Zora and Prince Griffin. It’s enemies to lovers, but a little different. I wouldn’t say they hate each other, just that they don’t understand each other. The characters are compelling and complex. You are never sure what the characters’ actual motives are until the end.

The pacing is good. I felt like I cared about both sides of the story. It is an interesting premise too because it’s like The Hunger Games meets The Selection series and Shadowhunters had a baby.

Zora was a badass and gave me huge Mulan vibes, which I loved. I felt like every other male besides Griffin and one of the other Champions, Mauro, were a little one-note because they seemed like they were just sexist jerks. I was a little worried that because the book had such a strong feminine presence that Zora would be too perfect. This was not true at all. She failed plenty and made poor decisions. This made me like her even more because it showed that you can be strong and still make mistakes.

I would highly suggest this book if you want to read about some awesome ladies. There are a variety of women. You have Zora, who fits the role of the strong yet sensitive woman who could beat your butt. You have her roommate, Loretta, who is a successful business owner just looking for love. Finally, you have Allegra, the princess of a neighboring kingdom, who is doing whatever she needs to keep her people safe.

I am curious to see where this series goes. I would follow Zora and Griffin anywhere.

The book is available on Amazon. You can find it here.