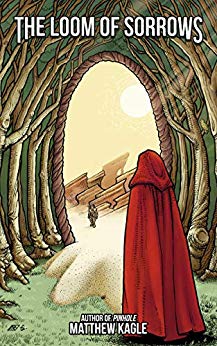 The Loom of Sorrows tells the story of a tour guide who ends up being recruited by an order whose mission is to collect and preserve memories so that they can help others learn whatever truths they may need to learn. It usually takes years to learn how to collect and interpret memories, but our main character has to learn in a matter of weeks after memories were passed to him during an incident on a tour. Now, he must leave his pregnant wife and young daughter to complete key memories of Earth’s savior Ennun before the memories kill him. He takes up the man’s mission and even his identity in an effort to live.

I thought the story was very interesting because it takes place in a post-nuclear energy society where Earth was destroyed and the survivors were protected by aliens called the Twigs until a small group decided to try to go back to Earth and see if humans would be able to survive there again. The only survivor from the group was Ennun, so in the future, he is known as Earth’s great savior.

I thought the different perspectives were a little jarring when I first started reading, but then I quickly realized the fonts change when memories are being experienced, and then back again when you are being told the story from Master Keldin’s point of view. I enjoyed this book. I’m excited to read the sequel A Thousand Secret Sorrows so I can continue this journey with Master Keldin and find out what happened to Ennun on his journey back to Earth.

Overall, this was an extremely quick read, and it reminded me how a memory isn’t just what happened. It’s about how one person perceives a memory can change the entire course of history.

The Loom of Sorrows by Matthew Kagle is available for purchase on Amazon or with Kindle Unlimited.