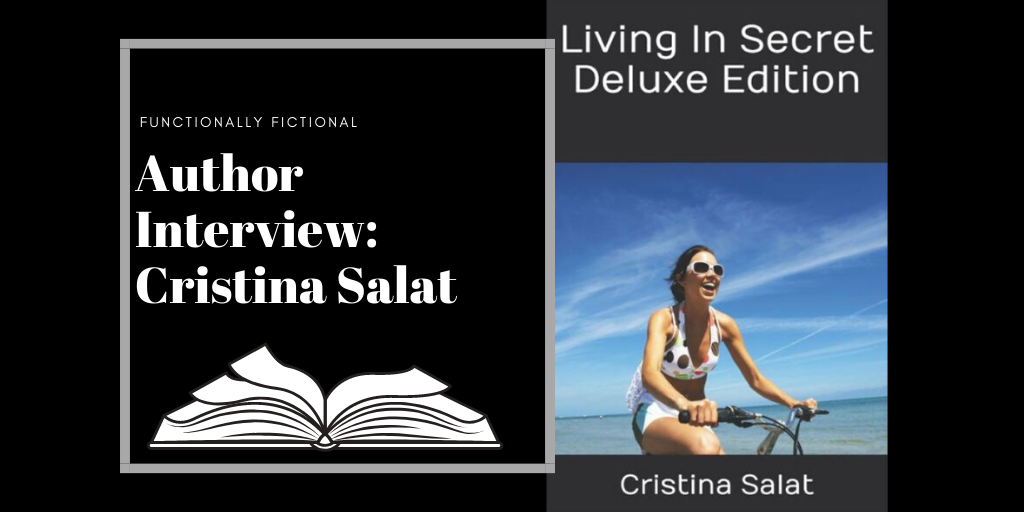 Hello, readers! In October, we shared an interview with Cristina Salat about her book The Skin of Water. Today, we’re bringing you more on this Gathering the Dreamcatchers series. We’ll be discussing Living in Secret, but first, a special deal!

Let’s jump into the interview!

Q: How did you come to write a book with a positive, realistic portrayal of non-traditional families as part of a dramatic kidnapping tale?

A: People have asked over the years how this story came to be written and published with a good yet not simplistic portrayal of gay people and families while gay folks in general are still struggling to be seen as regular people who get to do regular things like get married and raise children… and the truth is: I’m not exactly sure. I know I was determined to write something that mattered, and I believe Lady Luck was also on my side. I left the world of publishing and wearing the hat of a full-time editor in order to begin writing my own books rather than exclusively working on the wonderful books of other people… and LIVING IN SECRET is the first novel that was born.

Q: Did this story come out of your own experiences?

A: Well, I’d left the gray cement streets of New York and moved to what felt to me at the time like perpetually sunny San Francisco (even when it was foggy)… this was back in the days when pink-haired people roamed palm-tree lined streets and folks you passed would smile and say hello. And when I took my notebook to Golden Gate Park or a local McDonald’s to write (since my first San Francisco home was very much like Amelia’s Sunshine House, only with way more people living in it!), this story is what came forth from my pen. So the sights and smells were real… but no, I’m not a mother, so I’d never had to deal personally with issues of custody. San Francisco is rich with gay pride parades and rainbow flags, but as a population, civil rights for LGBT people can sometimes still seem a ways off, so I wanted Amelia’s story and the questions that arose from it to reach out to the widest audience possible.

Q: Did you always intend to write a sequel?

A: Right from the first draft I was aware of other facets of Amelia’s story… other paths the realities of parental kidnapping and custody issues and kids with a gay parent can go down. So I knew a second book or even a series was possible. But after the 3 years it took to write this novel and get it just right… and then the promotion whirlwind, plus starting a part-time job in a San Francisco homeless shelter for teens (which brought forth ideas and characters for an entirely different novel that eventually turned out to be ‘The Skin of Water: Defending The Dreamcatchers’), well, I didn’t feel quite ready to dive back into Amelia’s life and story even though readers kept asking what happened to her from time to time. Then 2015 arrived with the Supreme Court ruling that gay couples could now get legally married… and of course the part of me that had been hoping for just this kind of fairness when I first wrote LIVING IN SECRET was overjoyed. Then I received, out of the blue, this email:

Dear Ms. Salat,
I just finished reading the uncorrected proof of Living in Secret, which I have access to because you sent a copy to the Lesbian Herstory Archives, where I just started working this summer. I haven’t been this engrossed in a book in a really long time. I can’t get over how good it is, but I am also so distressed by not knowing what happens that I decided to email you. I’ve never emailed an author before. I don’t know if you can tell me what happens or if you thought of what came next, namely what Amelia decided. Does she just do nothing and wait till she’s 18, try to escape her dad again, or take things to court? Is she successful in getting back to San Francisco and how long does it take her? What does she find her orientation to be one day? Does her father ever come around in his thinking? How I wish there was a sequel! Even if you aren’t able to tell me anything, thank you for reading this and for writing such a great story!
Rebecca A.

At the time I wrote Amelia’s original story, it felt important to leave the ending open for readers to mull since the people who made up its audience were exactly the same people who would grow up to turn new possibilities into reality here on Planet Earth. But then we entered a new millennium and recently this particular book just kept coming to mind in a way that felt like at least an epilogue — if not a whole second book — reconnecting with Amelia and her family now that the landscape of civil rights had improved — was in order. So I thanked the email writer of the divinely-worded message for reaching out to express her appreciation and distress, and promised to let her know what developed.

Many things in the world have changed beyond even the historically significant gay marriage ruling… yet even amidst all these world changes, volatile issues of child custody and healthy human rights for all remain. So, Rebecca (and anyone else who has asked over the years: “And then what happened?!”), with a fair amount of creativity, fresh research, and some time compression, at long last… ‘Esoterica’ — sequel to Amelia’s initial story — has now also been born as what is now the third title in the ‘Gathering The Dreamcatchers’ companion novel series (https://www.amazon.com/Gathering-Dreamcatchers-Omnibus-Companion-Esoterica/dp/153498738X).