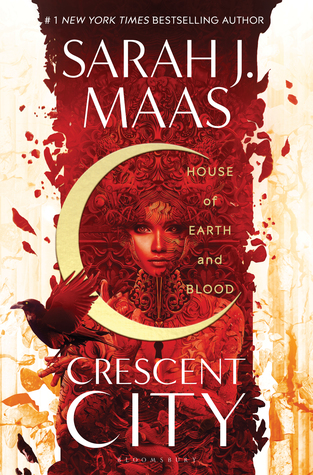 Bound by blood.
Tempted by desire.
Unleashed by destiny.

Bryce Quinlan had the perfect life—working hard all day and partying all night—until a demon murdered her closest friends, leaving her bereft, wounded, and alone. When the accused is behind bars but the crimes start up again, Bryce finds herself at the heart of the investigation. She’ll do whatever it takes to avenge their deaths.

Hunt Athalar is a notorious Fallen angel, now enslaved to the Archangels he once attempted to overthrow. His brutal skills and incredible strength have been set to one purpose—to assassinate his boss’s enemies, no questions asked. But with a demon wreaking havoc in the city, he’s offered an irresistible deal: help Bryce find the murderer, and his freedom will be within reach.

As Bryce and Hunt dig deep into Crescent City’s underbelly, they discover a dark power that threatens everything and everyone they hold dear, and they find, in each other, a blazing passion—one that could set them both free, if they’d only let it.

Well, I did it… I finally read the first Crescent City book.

And I absolutely loved every second of it, even the parts that made me ugly cry. Especially those parts. SJM has such an incredible way of letting me connect with these characters, of pulling on all the heart strings. She’s one of the few authors I’ve ever read who’s able to consistently surprise me, shatter me, and simultaneously make me continue to want to be destroyed. I will tell you, I don’t cry often while reading. I might tear up once in a while, but it’s rare that I full-on cry. Yet, SJM has made me sob with several of her books, including this one. More than once.

Without spoiling anything, she broke me within the first five chapters. As a reader and an author, I’m amazed out how quickly she can make fall in love with these characters. And how devastating it is when something happens to them.

This book was emotional, to say the least. Bryce and Hunt both have troubled pasts, which creates a bond between them as they work together. At one point, they talk about being each other’s mirror, and I thought that was such a beautiful (but heartbreaking) moment. I love their friendship and how it naturally evolves. Their chemistry is wonderful, and I mean that in every way. Yes, I ship the heck out of them, but it’s really that friendship that made me adore them.

As always, the side characters were just as well developed. From Ruhn (my favorite) and his friends to Lehebah and Juniper and Isaiah to the smaller characters that weren’t on the page as much, everyone felt very rounded. They all have stories, even if we don’t see them all. Knowing SJM, we’ll get more of those backstories as the series continues.

The world building… I will admit, the first few chapters had a lot of info dumping. It was honestly hard to keep track of everything in the beginning. However, the more I read, the easier it got. Everything eventually made sense. And it wasn’t near as slow or as difficult as I’d feared going in. I was intrigued by the second chapter, completely hooked by the end of the fifth. It was one of those books that made it difficult to get anything done because I just wanted to keep reading; I couldn’t stop thinking about.

This book is marked for adult readers. There is quite a bit of gore compared to her other books, but the rest didn’t seem that much more “adult” than them. I think it’s primarily because of the age of the characters (Bryce is 25). Regardless, if you enjoy her other series, definitely read this one. It’s wonderful and easily became a new favorite. I can’t wait to be destroyed by the second book!

2 thoughts on “Cait’s Review of “House of Earth and Blood” by Sarah J. Maas”