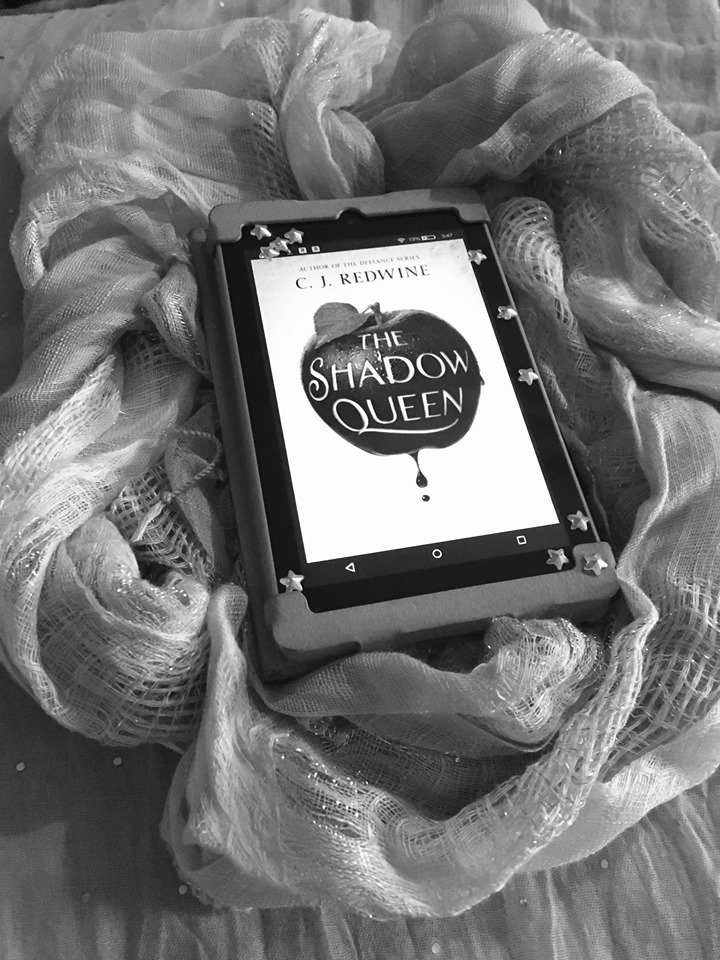 The Shadow Queen is the first book in the Ravenspire series. I’ve mentioned several times that this is one of my favorite series. Each book is a different fairy tale retelling focused on different characters, all of which take place in the same world. I have reviewed books 3 and 4, The Traitor Prince and The Blood Spell respectively.

I originally read this book back in 2017 (I think), and loved it. It was one of the books for my book club in this past April, but I was already re-reading it because The Blood Spell made me want to read the entire series again. So, I’m working my way through the audiobooks.

The Shadow Queen is a retelling of Snow White… with dragons. Really, what more do you need to know?

Lorelai, the crown princess of Ravenspire, is on the run with her younger brother, Leo, and guard, Gabril, after her stepmother, Irina, kills her father. Irina is a powerful Mardushka, who has taken over the kingdom. She longs to control everything, and the only thing she is concerned with is Lorelai being strong enough to return and attempt to claim the throne.

After a tragic accident, Kol becomes king of Eldr–the kingdom of dragon shapeshifters that is being brutally attacked by ogres. In an attempt to save his kingdom, he travels to Ravenspire in hopes that the powerful queen will help him. When she proposes a deal in which he captures the fugitive princess for Irina’s help, he has no choice but to accept. His people are dying and he’s desperate.

Lorelai and Kol have met, though. He just didn’t realize she was the princess. So, when their paths cross again, he must make a decision.

I loved this book the first time, and I think I loved it even more this time. Re-reading this book was a great way to get back into the world. And it’s interesting going back to the beginning now that I know about the other kingdoms.

This series and world are just amazing. The world-building is phenomenal. Each kingdom has it’s own feel, and I love that we get a bit of multiple areas as Lorelai and Kol travel for their different missions and goals. We get to see different villages, magical forests and rivers, and even ogre-dragon battlefields.

Lorelai and Kol are both great. They feel deep and real. I quickly grew attached to them. Both deal with tragic losses, different powers, and have an intense desire to do everything they can for their kingdoms and loved ones. They connect on multiple levels and there were so many moments that made my heart flutter. Leo and Gabril, as well as Kol’s friends Trugg and Jyn, bring a lot of heart and humor to the two serious main characters. They show a lightness throughout the dark situations they’re going through.

It was also recently brought to my attention that the dragons–Kol and his friends–represent the seven dwarfs. I somehow missed that both times reading it, and it blows my mind! I don’t know how I didn’t make that connection. There are literally seven of them.

Get Your Copy Here!*

*Functionally Fictional is an affiliate of Book Depository. I receive a portion of the commission from any product purchased through these links.

4 thoughts on “Cait’s Review of “The Shadow Queen” by C. J. Redwine”